We have planned same-sex destination weddings in Punta Cana, Aruba but mostly in Riviera Maya, Mexico.  If any of these destinations is your preferred destination to plan your very special day, then let’s start planning as our wedding planners has the knowledge of the resorts who work best with our same-sex couples.

Weddings are such a spectacular affair that requires the elegant touches and attention to every little detail. Our couples will find destination wedding packages at the resorts we work with, offering sublime wedding venues and unparalleled service for your day of celebration. Whether in Mexico or the Caribbean, our couples will find a resort that offers all-inclusive amenities to make your wedding nothing less than the once-in-a-lifetime experience.

You can rest assured that when you book your destination wedding with us, we will never treat you differently because of your sexual orientation. Our goal is for everyone who books with us, for them to have the best destination wedding planning experience possible. We have a preferred list of LGBT friendly destinations where you will celebrate with your family and friends to say “I do”.

Here are some legal requirements for a same-sex legal wedding in Quintana Roo.

Now let’s plan your destination wedding of your dream!

Aruba is located in the heart approximately 16 miles from the South American coastline. The Island is 19.6 miles long and 6 miles across at its widest point, with a total area of 70 square miles. Aruba’s topography and vegetation are unusual for a Caribbean island. On the south and west coast there are miles of pristine white beaches that rank among the most beautiful in the world, rimmed by calm blue seas with visibility in some areas to a depth of 100 feet. The average temperature is 82 degrees Fahrenheit. The greatest likelihood of precipitation is from October through January.

Known worldwide for its eco-tourism efforts, stunning natural beauty from the rain forest to the beaches, and an extensive amount of wildlife species that live in the varying habitats, Costa Rica is a top-notch destination. Many visitors favor Costa Rica for its seemingly laid-back culture and to enjoy the lifestyle known as “pura vida” that most locals adopt, which means pure life. Although the country may be somewhat small in size, it offers a great variety of places to explore, animals to discover, and clean beaches to enjoy the sun and surf.

A place known for its resorts and white sand beaches, Punta Cana is the leisure lover’s ultimate getaway. Located on the most eastern cape of the Dominican Republic, the region looks out over the azure seas of the Atlantic Ocean and dense mangrove forests where a multitude of birds and animals unique to the Caribbean live. But more than beach lounging and relaxing, Punta Cana is a playground for all levels of thrillseekers. From those who find nothing more exciting than a challenging game of golf to adrenaline junkies who′ll go from windsurfing to deepsea diving without blinking, opportunities abound. Many of the resorts on Punta Cana have all-inclusive packages offering adventure and relaxation all on the same bill. But travelers can just as easily enjoy the spoils of the soft sands and ocean views on their own. And when that became repetitive, travelers can head out of town where to find cigars, ancient petroglyphs, and culture that dates back to the arrival of Columbus.

The eastern half of the Dominican Republic and the National Park of the East are famous for an underground labyrinth of caves, which is home to one of the largest networks of caves in the world. Manantial de Padre Nuestro is one place that takes spelunking and diving to new depths, conjoining the two to allow exploration of the underground, underwater maze of caves where the remains of Taíno culture await, perfectly preserved. And right in the heart of the resort scene is the remarkable Punta Cana Ecological Reserve that is considered one of the bestkept secrets of eco-tourism. A huge array of creatures in this biodiverse setting live around the stretch of lagoons within the park.

The rich land… The dreamy landscape… The warmth of its people… The past and the present in perfect harmony… This is Mexico. Mexico offers vacationers the tranquility and beauty of its lovely beaches, known and admired all over the world for their eternal sun and warm ambiance.

It is one of the only places where you can find spectacular archeological sites and colonial cities that tell stories of glory and tradition. Unmatched landscapes, varied and exotic dishes, and the genius of Mexican craftsmanship all contribute to the wonder of this beautiful country. Mexico is a land of contrast, tradition, culture and fun, all at an excellent price and first class comfort. 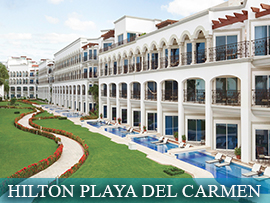 Cheers to the weekend! Spent an amazing time cel

Reflecting on the past week with our female concla

I had an amazing opportunity spending the last 5 d

A visit to the arches in Cabo is a must! Why? It'

We love surprises and we were in for a treat today

I am happy to say the resorts are really keeping u

Getting back slowly to the new normal. As a trav

We love the west coast of Mexico and Los Cabos nev